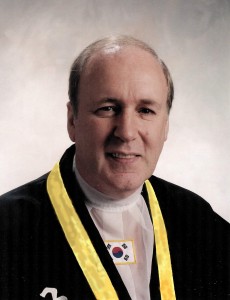 On a cold, rainy day in The Hague, Holland, a ten year old boy picked himself up from the ground and headed toward home with a heavy heart.  Once again the victim of school bullies, he dreaded the thought of having to face his father, who no doubt would send him right back out to deal with the boys who had attacked him.  Instead, when he arrived home, he was greeted by his uncle who took him by the hand and marched him to a local gym, where he introduced the young lad to his friend with whom he trained in the art of Jiu Jitsu.  So began Rudy Timmerman’s lifetime journey in martial arts.

Although he began his career  in Japanese Jiu Jitsu as a young lad in Holland, he changed focus of his training when his family moved to Canada in 1958.  The reason for this change was not because of lack of loyalty, there simply was no Jiu Jitsu school in the city he had moved to.  So, after seeing a demonstration of Kong Shin Bup by Grandmaster Pak In Shyuk, he joined to learn this exciting Korean martial art.  Later, when GM Pak moved away, Rudy opened his own school in Sault Ste, Marie, Ontario.

Despite the long distance, Rudy continued training with GM Pak,  and when GM Pak founded the art of Tae Keuk Do, he was appointed as the successor to Kong Shin Bup.  GM Timmerman trademarked the name; however, out of respect to his teacher, he did not claim the title of Grandmaster until 1998, when GM Pak passed away.  Since then, Grandmaster Timmerman has done his best to honor GM Pak, spread the art of Kong Shin Bup, and have it recognized as a legitimate Kwan in Korea where his teacher was born.

Today GM Timmerman still titles himself as a student.  In his travels all over the world, he has both taught and learned from some of the best.  In Korean dojangs, Chinese kwoons, and Japanese dojos, GM Timmerman continues to study, and to this very day he will gladly take off his black belt, put on his white belt, and step onto the mat to be the student he always has been.