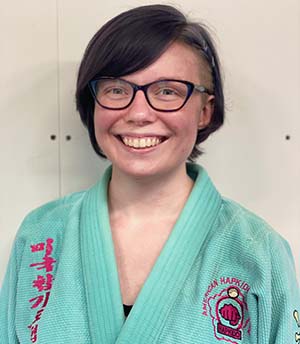 Mrs. Kyra Flamel has been training in martial arts in 2006 and began her martial arts journey in Tae Kwon-Do as a young teenager. Throughout her training, she competed with a focus on both point and continuous sparring and eventually became a youth TKD instructor after earning her 1st Dan. From there, Mrs. Flamel took charge of her school’s youth demo team and performed demonstrations alongside her students. Working with children in martial arts is what inspired Mrs. Flamel to pursue a career as a public-school teacher with the hope of continuing to positively impact and inspire her students to achieve their goals both in education and as citizens in her local community.

After earning her 2nd Dan in TKD, Mrs. Flamel began to branch out into other martial arts disciplines. She studied small circle Jiu Jitsu and Modern Arnis with Grandmaster Dan Strickler and Master Tom Bell. She began dabbling in Brazilian Jiu Jitsu and had the opportunity to train with BJJ professionals such as Victor Huber and Royler Gracie.

Mrs. Flamel discovered her newest passion in Judo under the tutelage of Sensei Jim Northcote (aka Judo Jim). She loves Judo because of the leverage-based techniques which allow smaller individuals to perform takedowns on much larger opponents. After several years of intense training and competing in Judo, Mrs. Flamel earned the rank Shodan (1st Dan) in Judo and at this time, had begun training in Hapkido with Grandmaster Jim Faralli.

Mrs. Flamel has been training with GM Faralli and the American Hapkido Alliance since 2013 and has since earned her 3rd Dan in Hapkido. She is among GM Faralli’s highest ranked black belt female instructors and continues to hone her skills in Hapkido alongside her martial arts family. Mrs. Flamel enjoys learning and understanding the intricacies of the techniques practiced in Hapkido as well as the qualities of confidence, patience, and empowerment that training has instilled in her. She hopes to help others become more confident and to inspire other women to learn self-defense through martial arts. Mrs. Flamel is currently scheduled to test for her 4th dan Master Rank in Hapkido in April of 2022.

Outside of training, Mrs. Flamel works as a middle school intensive reading teacher. Her favorite activities outside of training include reading (especially Stephen King), gardening, and spending time with her loved ones. Mrs. Flamel is looking forward to teaching as well as learning alongside others at the KMAF!