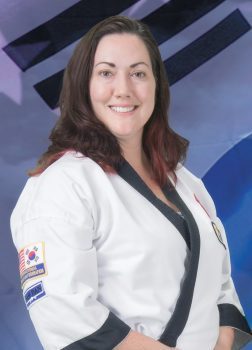 Terri Dufour is an International Tang Soo Do Federation certified instructor and third degree black belt. Together, Mrs. Dufour and her husband, Master Chris Dufour, own and operate the PTSDA Karate school in Pensacola, FL.

During her teenage years, Mrs. Dufour started her journey with her younger brother in 1995 with Jack Motley in Pensacola, FL studying Moo Duk Kwon Tae Kwon Do. With help from an assistant instructor, Michael Cain, she achieved first degree black belt in 1997 before departing for college.

While in college at Florida State University, she continued training on her own. She also dabbled in other classes such as Judo and Jujitsu taught on campus for college credit.

While away at college, her brother changed schools to the PTSDA Karate. Upon returning in 2002, she met the instructor, Master Chris Dufour. In March of 2003, they were married. In the fall of that year, she returned to training under the instruction of her husband. Hoping to test for her first degree in July of 2005, these plans were the first of many to be waylaid by the birth of her first child in June of 2005.

Mrs. Dufour has competed locally and internationally, most recently winning first in black belt forms and weapons at the International Tang Soo Do Federation European Championships in Cardiff, Wales.

Although training and competition is important, her real passion is teaching. In 2016, Mrs. Dufour was able to test and receive the title of Kyo Sa Nim through the ITF. She has been program director for the PTSDA Karate Children’s Program since summer 2015 and has worked in and around the dojang since 2004.

She enjoys training, family, hiking, and the outdoors. When not training, she and her husband can (not) be found on a remote mountain somewhere in North Carolina.