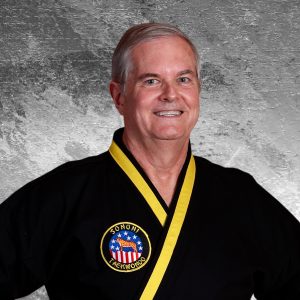 Master Dennis Barebo has spent most of his life in the martial arts. He started his martial arts journey in April of 1986 with the American Taekwondo Association under the tutelage of Master Chick Mathis and later Master Kevin Mathis. In 2004 he left the American Taekwondo Association and began training with the American Martial Art Institute under the tutelage of Master Kevin Mathis. His passion for the art of taekwondo led him to do something few students of the martial arts every do, develop his own taekwondo system.

In May 2006, Master Barebo began writing what would be the first of nine color belt forms. By December of that same year, he had completed writing nine color belt forms along with a first-degree black belt form. On April 14, 2008, he began teaching his first classes in the art of Songni Taekwondo. Since then, Master Barebo has written several manuals on instructor development training and weapons training, as well as several student training manuals.

Master Barebo has dedicated his life to the martial arts so that others may learn and come to love taekwondo. His philosophy on why we teach is simple: An instructor teaches so their art will live on. As instructors it is our mission to teach the past to the present for the future.

Master Barebo holds a Master’s Degree in Management from Troy University. He is also a certified fitness trainer, certified strength and conditioning specialist, and fitness coach. So far, he has retired twice in life. The first time from the United States Air Force in 1995. The second in 2019 when he retired from his position as Church Business Administrator for Fort Walton Beach First United Methodist Church.