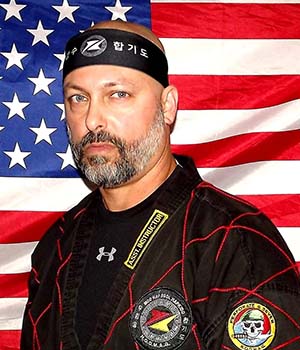 Mr. Ezagui completed three years as a soldier of the United States Army and upon separation from the military in 1997, he still had the desire to better himself. In early 2000, he notice his youngest brother wearing a martial arts uniform, and asked his brother many inquisitive questions in regards to the arts he was involved with. After this, Mr. Ezagui began his journey in martial arts after immediately signing up with the House of Discipline, under the instruction of Grandmaster Jimm McMurray. He would train, in both Hapkido and Taekwondo for close to three years before his life would take a different turn.

Mr. Ezagui married in October of 2003, consequently, during the same period, he stepped away from martial arts to start a family and change careers. Fortunately for him, he was always encouraged to take notes and established a school notebook to refer back to during his absence from direct in-school training. However, nearing the end of the summer in 2009, while shopping at a local Walmart, he reconnected with Grandmaster McMurray. At this time, Mr. Ezagui was experiencing financial difficulty and could not pay for the classes. Grandmaster McMurray extended the hand of friendship and said, “This is your first payment. See you in class.” At this time, it would have been six years since Mr. Ezagui had been away from training with the House of Discipline. This experience would propel Mr. Ezagui to his black belt in May of 2011, and as of March 2018 hold the rank of 5th dan.

Mr. Ezagui trained to become Master Ezagui, his goal moving forward was to have the deepest understanding of what it meant to be a high-level martial artist and discipline. Training and mastering many weapons; his favorites being knives and sword. During the years of advancement, Master Ezagui did sparring. He kept competitive, competing in Hapkido point, and Olympic-style Taekwondo. Master Robert would be the personification by which he would teach confidence and discipline throughout his training assistant instructor path.

Master Ezagui is now an assistant Instructor at the Harker Heights and Copperas Cove, Texas locations of the House of Discipline. He holds the title of Ministry of Moohapsool bestowed on him by Grandmaster McMurray, because of his dedication to the physical, mental, and spiritual aspects of martial arts along with the ability to recall key aspects that makes Moohapsool different from other Hapkido styles. Master Ezagui is and has dealt with a variety of internal to physical disabilities, and continues to condition himself to better his strength and flexibility. Always a student, he studies outside the boundaries of class time to ensure the maximum effectiveness of the techniques he trains. Steadfast to his Christian faith and values, he maintains a high moral standard and compassion towards others. Master Ezagui also believes and practices a humility first approach, as he realizes no one has all the answers. He has been a part of numerous demonstrations by the House of Discipline, reaching out into the local community. Master Ezagui has worked with many young students who have become successful adults, and adults who become more self-confident and skilled amongst their peers. He continues to teach the hard lessons he has learned, and many of the students have applied that knowledge which has led them to have great success.

Master Ezagui began teaching women and children’s self-defense classes called Not Alone Life Defense, which takes a self-preservation look and application to survive those who would victimize others.  He has traveled across the U.S, attending multiple training seminars to expand his knowledge. He has also been a feature instructor at the 2018 North American Training Seminar in Hutchinson, Minnesota. Master Ezagui has trained members of the VIP Group in Temple, Texas, who are visually impaired people of varieties of blindness. He has effectively taught biblical concepts by using martial techniques for illustrations and has choreographed fight scenes used in making videos with people to express visual emotion in music called human videos.

Above all else, Master Ezagui wants to make a positive difference in the lives of others, and continues to work with students, other martial arts schools, the local community, and his church to ensure this fulfillment.