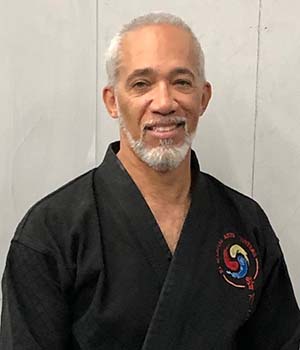 Dante J. James began his martial arts training in 1974 in the art of Shito Ryu Karate. He joined the Army in 1975, and continued training as a military policeman in arrest and control techniques. After discharge in 1979, he began training in traditional Taekwondo, receiving his Black Belt in 1983 and training continuously in Taekwondo until attaining the rank of 5th Dan in 2002. He traveled and competed nationally for almost 20 years, being ranked in the top ten for many of those years. During this period, he also studied (as in putting on a white belt) the arts of Aikido, Hapkido and Shorinji Kempo. Since 2002, he has trained exclusively in Hapkido under Master Dan Piller, achieving the rank of 4th Dan in 2013.

He was named International Director of Education of the World Hapkido Association by its President, Grandmaster Tae Hee Jung, creating and overseeing its International Instructor Certification Program which focused on ensuring consistency and quality in instructional methodology and technique. He held this position until 2016. He lived and trained in Japan for two years, and has trained or conducted seminars in the Caribbean, France, Korea, Japan, and in many dojang and dojo in the United States. He has taught hundreds if not thousands of students over the years, sharing with each student the mind, body and spirit of their martial art.